It's always a good idea to keep track of your keys 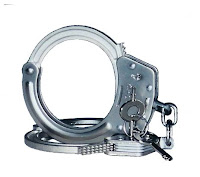 Police in Dearborn Mi responded to a call today by a man who had lost his handcuff key.

He had handcuffed his wife to his bed (in a good way, not in a bad way) and realized too late that he'd lost his handcuff key.

The police were able to free her using a basic universal key.

The police spokesman admitted the incident had "comedic value" but that no crime was committed.

The poor wife. Think she'll let him use the handcuffs again?
Posted by Sara at 6:23 PM