Don't tattoo your name on yourself if you're a criminal 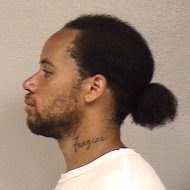 A man in Minnesota thought he'd pulled a fast one on the police when he gave them a fake name.

According to the police report, an officer stopped two men walking in the street at Forest Street and Minnehaha Avenue. One was "evasive" about his identification, telling the officer he had never had a photo ID. He said his name was Darnell Lewis, spokesman Peter Panos said.

The police were not fooled however because he had his last name tattooed on his neck.

Frazier was arrested on four misdemeanor warrants, including driving after license revocation, driving after suspension and no proof of insurance.

He also had at least two felony warrants for his arrest: a probation violation in Jackson County for bringing a stolen vehicle into Minnesota and a failure to appear in Hennepin County on a drug charge.

The man is now residing in prison.