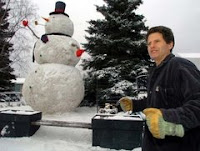 A family in Alaska has recieved a cease and dissist order for their snowman. The family builds a sixteen foot snowman every year.

The city also tacked a public notice on the door of the Powers family home at 1556 Columbine St. The Powers family and some of their neighbors have been building Snowzilla in the Powers' front yard since 2005.

When the notices went up, Snowzilla still didn't have a full torso or head.

"The kids had spent hours and hours of work on it," Billy Powers said on Sunday.

The city declared that the snowman is a safety hazard and that the traffic it generates is dangerous and town council members have been told to watch out for covert snowman building at the Powers' house.

That sucks... it must have taken a long time to build it just to have to plow it down. Hey I have your link up under Heaven's Army section of www.heavenhasfallen.com