Just what I always wanted: a robot that loads the dishwasher 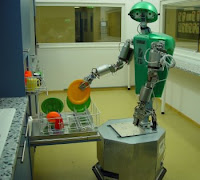 A group of scientists in Japan have created a robot that does the dishes! The robot rinses the dishes in the sink and then neatly lines them up in the dishwasher.

Using its internal camera along with the sensors, the robot is able to determine the shapes and sizes of dirty dishes and utensils placed in the sink before picking them up and loading them in the dishwasher.

Scientists have set a target of creating a smaller and lighter robot which will be able to load the dirty plates and cooking utensils of a family of four into the dishwasher in just five minutes.

The robot will be available for sale in five years, with scientists also promising to tackle other household chores with the creation of devices capable of performing disliked activities such as the laundry.