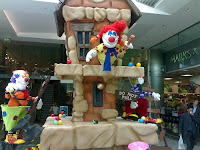 A clown hired to entertain kids on a flight was searched and had some of his tools confiscated by airport security in England.

Dave Vaughn said when he attempted to board a flight at Birmingham International Airport dressed as PC Konk the clown, he was stopped by security and told to remove his costume, The Mail on Sunday reported.

Vaughn, who was to provide entertainment on a flight for disadvantage youth, said airport guards then deemed his plastic handcuffs as a security risk.

"My plastic scissors and camera got through fine, as did my funny glasses and bubble machine, but then they discovered my plastic toy handcuffs," Vaughn said of the recent incident. "I told them I had bought them from the Early Learning Center especially for the trip but they still said they were a risk."

They allowed him on the fight after determining that his suspenders were what set off the metal detector.

Seems like airport security has watched the Dark Knight too many times.