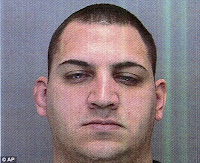 A man in Philadelphia shot another man in a movie theater because he wouldn't keep his family quiet.

According to police, suspect James Cialella, 29, told a man and his family to be quiet during the showing of 'The Curious Case of Benjamin Button.' Police said Cialella then threw popcorn at the victim's son and a physical altercation ensued between Cialella and the man.

The man has been charged with assault.

Sounds like both parties were behaving badly, but really shooting someone because they're talking during a movie? Sounds like he needs anger management classes.
Posted by Sara at 6:31 PM