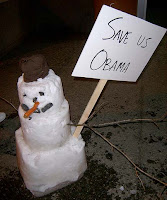 A group of snowmen showed up at city hall in Anchorage Alaska to protest the possible demise of snowzilla.

A group of protesting snowmen carrying signs like "Snowpeople have rights" made a brief appearance at city hall in Anchorage, Alaska, this week.

The 3-foot-high snowmen appeared Christmas Day, the Anchorage Daily News reported. By Friday morning, they had been removed and their signs placed in the trash.

They threw the snow-people in the trash. That's terrible.

Other signs carried by the snowmen included "Heck no we won't go" and "Snowzilla needs a bailout."