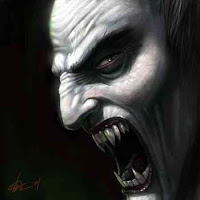 A political candidate who calls himself a vampyre was arrested for harassing his ex-girlfriend who broke up with him by telling him that she was a vampire hunter.

John Alfred Sharkey, 44, of Toms River, N.J., was held in the Olmsted County jail Wednesday in lieu of $125,000 bail. He was charged last summer, but didn't appear in court until last month after he was arrested on a warrant.

Sharkey, who calls himself the "The Impaler," ran as the Vampyres, Witches and Pagans party candidate for Minnesota governor in 2006, when he listed Princeton, Minn., as his address.

The criminal complaint says he was running for president in 2007 when the 16-year-old Rochester girl wrote a message of support on his MySpace page. She told police they began dating online, and the threats began when she tried to break off the relationship.

She told police that "in a desperate attempt" to get him to leave her alone, she had e-mailed him that she was a member of an elite vampire hunter society and that continuing their relationship would put him in danger. Her father told police he talked to Sharkey, but Sharkey continued to call the girl and write letters to her parents.

There's a Vampres, Witches and Pagans party in Minnesota? How do they get enough signatures to get on the ballot?