Old John is dead, survived by the sink and urinal 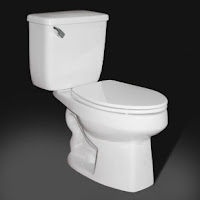 John, a toilet killed in an accidental restaurant shooting has been laid to rest in Utah.

The toilet was shattered by a bullet Jan. 12 when a man's gun fell from its holster as he was pulling up his pants, police said. Police do not plan to file criminal charges in connection with the incident.

Christian Martinez, manager of the Carl's Jr. where John was gunned down, held a memorial service Friday at the restaurant. He gave away bottles of John's favorite toilet cleaner, Kaboom Bowl Blaster, to the eatery's first 50 patrons.

"In all my years, I can say without a doubt that I have never delivered for a toilet," said deliveryman Doug Graham, "but I thought it was the funniest thing I've ever heard. I got a kick out of it."

Remnants of John hit and cut the gun owner's arm, but he was not seriously injured.

Police blamed John's death on the gun and style of holster the man was using.

"He was survived by the men's urinal and wash sink," said Martinez. "He left us way too soon."

This is a sad occasion for everyone. I hope that his replacement can fufil his duties as well as he can. Please leave your well wishes in the comments section.

Use me well
And keep me clean,
And I won't tell
What I have seen!

This post is too funny! By the way you've been tagged!