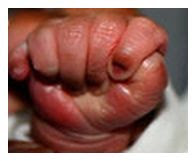 A baby in California has been born with 12 fingers and 12 toes.

According to doctors at the Saint Luke's Hospital in San Francisco, a perfectly healthy baby with extra fingers and toes was born three weeks ago, to Kris Hubbard and Miryoki Gross of Dale City.

“Nurses and doctors, looked so normal they couldn't tell, they told me he was six pounds in good health, that was all they said,” said Miryoki Gross. Nobody initially took notice of the abnormality in the baby, until his father pointed it out.

The condition of having extra digits is called polydactyly and has a genetic origin. Though it is not a very uncommon trait, it was special in the case of Baby Kamani Hubbard since all his 12 fingers are fully developed and functional, as are the toes.
Usually, the extra digits in cases of polydactyly are vestigial and do not serve any function.

The condition has been running in Kamani Hubbard's paternal family. “Some family members have had six fingers, not completely developed,” said his father, Kris Hubbard, adding that six toes had never cropped up before, in his family.

Mostly, cases of polydactyly are surgically corrected. Kris Hubbard himself had nubs of sixth fingers, which were removed during his early childhood.

But the perfect development and functionality of the fingers in Kamani Hubbard's case is intriguing and the doctors are now in a dilemma over their surgical removal.

“I would be tempted to leave those fingers in place. I realize children would tease each other over the slightest things, and having extra digits on each hand is more than slight,” said Dr. Michael Treece, a Pediatrician at St. Luke's Hospital. “But imagine what sort of a pianist a 12-fingered person would be imagine what sort of a flamenco guitarist, if nothing else think of their typing skills.”

So would you keep the extra toes and fingers if this was your child?