Is that a pigeon in your pants or are you happy to see me? 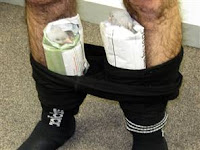 A traveler in Australia was caught trying to smuggle (among other things) two live pigeons in his pants.


The 23-year-old man was searched after authorities discovered two eggs in a vitamin container in his luggage, said Richard Janeczko, national investigations manager for the Customs Service.

They found the pigeons wrapped in padded envelopes and held to each of the man's legs with a pair of tights, according to a statement released by the agency. Officials also seized seeds in his money belt and an undeclared eggplant.

Not sure which is weirder. The pigeon or the eggplant.