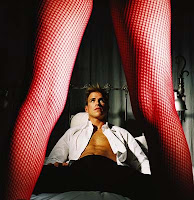 Wall street lawyers, investment bankers, CEOs and media executives often used corporate credit cards to pay for $2,000 an hour prostitutes, according to the madam who ran one of New York's biggest and most expensive escort services until it was busted last year.

But prosecutors in the Manhattan District Attorney's office chose not to pursue any of the corporate titans, says Kristin Davis, who pleaded guilty last year to charges of running a prostitution business that used more than a hundred women.

"They showed no interest," said Davis in an interview for broadcast Friday on the ABC News program 20/20.

"Some of these guys, I was invoicing on corporate credit cards," she said. "I was writing up monthly bills for computer consulting, construction expenses, all of these things, I was invoicing them monthly so they could get it by their accountants," Davis said.

Now that's nice. Hopefully they get our tax dollars back for those deductions.