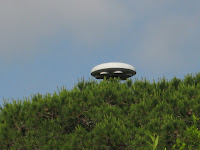 A town in England has blamed the damage to their wind turbine on a UFO.

Robert Palmer, 66, head of the East Lindsey District Council and member of the Lincolnshire County Council, reported seeing a bright white light with orange borders while he was driving near the turbine early Sunday morning.

"I would be very interested to find out what it was," Palmer said. "If we are being looked at by other people, by other planets, it would be interesting to find out why they have chosen this part of the country."

Not everyone thinks it was a UFO though, including the manufacturer of the wind turbine.

"It does happen that a blade will sometimes just come off a machine for one reason or another," he said. "The main reason is the blade may shear."

"We don't normally see things like aircraft -- or UFOs -- hitting them. It's usually a mechanical failure that causes the blade to separate from the main hub," he said.