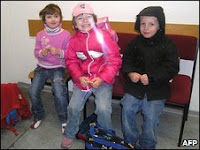 German police stopped a trio of youngsters planning a romantic elopement in Africa. The couple (she is six and he is five) were spotted at a train station with their official witness (who is seven) by police. The trio packed their bags with swimsuits and sunglasses and hiked about half a way to the train station. The trio did not however have any money or passports.

Officers persuaded the children they would not get far without tickets and money, but consoled them with a free tour of the police station, where they were shortly picked up by relieved parents.

Although any marriage plans have been put on hold for now, police did not altogether rule out the possibility of an African wedding.

"They can still put their plan into action at a later date," AFP quoted the spokesman as saying.

This will make a great story for their parents to tell when they're teenagers. I hope they enjoyed their tour of the police station and didn't get in too much trouble for running away and didn't give their parents too big a scare.
Posted by Sara at 11:02 PM