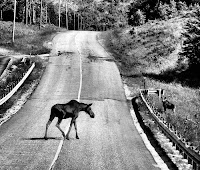 The Alaska Moose Federation has several new ideas of technologies they would like to implement to keep moose off the road.

"Everybody loves moose and they taste a lot better when they're not marinated with antifreeze," Olson said.

One of the plans promoted by the non-profit calls for crosswalks with flashing lights that would warn motorists when moose are crossing the road. Another plan would install mats near roads that would shock moose walking on them and a third scheme would create groomed trails leading moose to feedlots far from roads.

Really? Moose cross walks? What are they doing to do with moose jaywalkers?