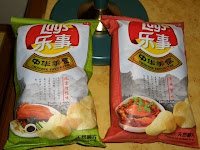 A British company is releasing several types of strange flavored chips to the public.

A total of six new flavored chips will enjoy a limited sales effort as members of the public vote on which one of the snack items they feel is worthy of a permanent sales position.

More than 1 million suggestions for chip flavors were offered as part of the Walkers campaign and the remaining six were chosen by a select panel of judges.

Cajun Squirrel? No thanks.