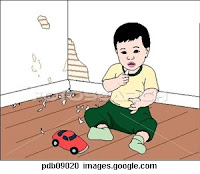 A Nebraska toddler fell three stories off of an apartment balcony and has only minor injuries to his face.

Jacob Bettin, a police spokesman, said 1-year-old Dennis Nimely was playing on the third-floor balcony of an apartment in Omaha's Wentworth Townhomes when he fell through a small opening, KETV, Omaha, reported Wednesday.

The toddler was taken to Nebraska Medical Center for treatment of his injury. Police said no arrests were made.

How lucky was he? Hopefully this reminds everyone that they need to childproof their balconies.