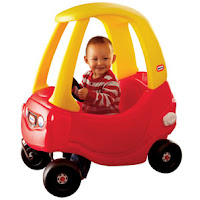 America's best selling American car is the Cozy Coupe. The red and yellow car has been popular with American toddlers for thirty years.

It has sold more than 10 million units in its 30-year history, to become one of the most easily recognized and popular cars of all time, easily landing in the list of top-20 nameplates in history ahead of perennial favourites such as the BMW 3 Series.

It is the Little Tikes Cozy Coupe, which began production in Macedonia, Ohio, in 1979, later moving to Hudson, Ohio, in 1985 and is celebrating its 30th anniversary in 2009 with a special edition model.

And now it has landed a parking spot at Cleveland's Crawford Auto-Aviation Museum, a prestigious institution that is one of the Top-10 automobile museums in the U. S., according to Car Collector Magazine. The Crawford Museum will house one of the first Cozy Coupes to come off the production line in 1979 as well a 30th Anniversary edition model.

Those cars are sturdy too. I've never seen one stuck on the side of the road.