Teen uses banana to rob bank, eats it while waiting for cops 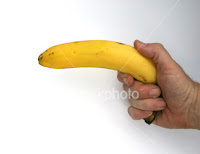 A teenager in North Carolina tried to rob a bank with a banana and then ate the evidence while waiting for the cops to arrive.

Winston-Salem authorities say 17-year-old John Szwalla held the banana under his shirt when he entered the store Thursday, saying he had a gun and demanded money.

Owner Bobby Ray Mabe says he and a customer jumped Szwalla, holding him until deputies arrived. While they waited, Mabe says the teen ate the banana.

I'm surprised he didn't split when the cops arrived.