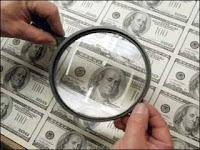 A New York man was reported to police when a stripper turned him in for giving her fake ten dollar bills.

Authorities said Michael Harris, 40, was arrested in the early hours May 5 after a stripper at the Gotham City peep-show parlor determined that his $10 bills were counterfeit and told a manager, the New York Daily News reported Thursday.

Harris threw 21 of the fake bills on the floor of the establishment and attempted to flee, but he was caught by the manager and held until officers arrived, police said.

Investigators found a few more of the bogus bills stashed in Harris' boot. They said he walked into the business with 28 of the fake notes, which appeared to have been made on an Ink Jet printer.

He said he got the money from a "friend." Yeah, ok and he didn't notice that the bills looked nothing like real money?