Woman saved by her bra 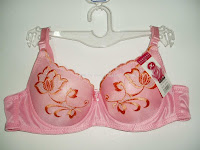 A Michigan woman has her bra to thank for saving her from a bullet.

Police said Leola Brock-Reese wasn't home at the time of the burglary, but her 57-year-old neighbor was and saw men breaking into the home on the city's west side.

The woman's daughter, who is also a Detroit police officer, said her mother's minor injuries are from the broken glass.

Who'd of thought that a bra could not only save your figure but save your life.
Posted by Sara at 8:43 AM