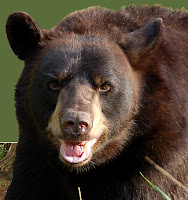 A pregnant Colorado woman was hit by a car after running away from a black bear.

Twenty-6-year-old Ashley Swendsen says she thinks the bear followed her more out of curiosity than malice because it kept a distance of about 10 feet the whole time she was running away from it at a hiking trial this morning.

The Division of Wildlife says the incident occurred in an open space area where bears are common on the northwest side of Colorado Springs. The bear was later euthanized after Swendsen identified it.

Officials say Swendsen had managed to scramble up an embankment and was crossing the street when she was hit by a slow-moving car. She wasn't seriously injured.

She's also said that she's going to give her child the middle name bear.