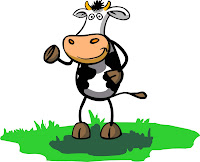 A town in the UK has enlisted cows to deter youths on motorcycles that have been tearing up fields and knocking down fences.

since the cattle, which are owned by a local farmer, were introduced recently, complaints about anti-social behaviour have dropped sharply.

Officials at Hampshire County Council also hope that the presence of the cattle could deter travellers, who have settled at the site in the past, from returning.

They are considering whether cows may be the solution to other sites blighted by anti-social behaviour.

And while discussions on whether to place permanent football pitches on the site continue, officials say that the cows have an added benefit – by fertilising the grass with their manure.

"In the fields before, youths were breaking down the fence and coming in on motorbikes and tearing the place up," said John Sharkey, a spokesman for the council.

"The council received a number of complaints from residents and dog walkers.

"In response to those complaints we decided to bring in the cattle.

"Since the cattle were put in the anti-social behaviour has stopped and the people using the playing fields are much happier.

"I believe it works because the cows get in the way.

"As well as dealing with the problems, the grazing makes the quality of the land better."