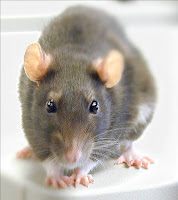 Kentucky students raced rats in an annual event at Spalding University this week.

The event is in its 37th year and pits teams of Spalding students, staff and faculty against one another to train their rats to race around a .024 furlong track. The races celebrate the end of the "rat race" of finals week and concludes a week's worth of events, such as a cereal-eating contest and a "Rat Hat" contest.

Before racing got under way, a parade was held for the teams who trained the rats. But yesterday was all about racing.

Churchill Downs bugler Steve Buttleman played "My Old Kentucky Home" to kick off the races and he played the signature call to post before each race.

I wonder where the rats live when they're being trained. In the dorms? In frat houses?
Posted by Sara at 5:11 PM