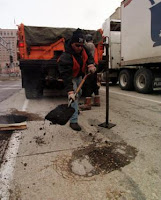 A city in the UK has found a new way to discourage it's residents from speeding, potholes.

An article in the parish council newsletter, under the headline New Thinking Please, described potholes as "friendly".

Written by Cllr Mike Parrish, it reads: "Potholes cost a lot to repair and that's our rates. Coupled with potholes there is an ongoing cry for speed limits.

"So what with saving much time, rates and calming the traffic, potholes seem quite friendly."

Mr Parrish added that allowing pot holes would benefit the parish by "slowing traffic to our ideal way of life, save hedgehogs and rates and possibly keep people out."

But Mr Tyzack said: "As a former police officer, I know the dangers of unsafe road. This is ludicrous."

Adrian Enkel, vice chairman of Navestock Parish Council, said: "It's worth a shot. We'll see how it goes.

I think I'd rather have speed bumps. Potholes aren't good for your car, or people or bicycles.