Will trade ski passes for drugs 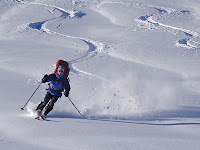 A group of guys in California have been arrested for offering to trade lift passes for drugs.

Mono County sheriff's deputies told The Orange County (Calif.) Register Wednesday that the suspects were busted after answering an ad posted on Craigslist.com that offered to swap ticket vouchers for the Mammoth Lakes ski area for narcotics.

Department spokeswoman Shannon Kendall told the Register that the operation netted a pond of marijuana and quantities of cocaine, ecstasy and prescription pills.

Four Orange County residents and two people from San Luis Obispo and Highland Park were arrested Friday and were in jail Wednesday on various drug-related charges.

Note to criminals. Do not use craigslist to facilitate your crime.