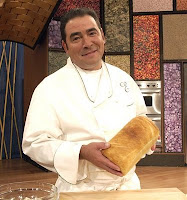 A Grandma in Ohio fought off four robbers with a saucepan. Unfortunately the police won't give it back.

Ellen Basinski was on the phone with her husband, who is a judge, when the four boys pushed their way into her house.

With quick-thinking she grabbed her favorite saucepan and hit one of the boys over the head with it.

The boys ran, but were later caught.

The police took the saucepan as evidence and Lagasse says she may never get the pan back, which is in his words, "not good."

So he called her up to say he's sending her a brand new ten-piece set of non-stick Emerilware.

The free cookware is being credited to their youngest son Michael, who e-mailed Lagasse saying, quote, "you saved my mom's life."

Go Granny! I wonder what she cooks with her saucepans. I bet it's delicious.
Posted by Sara at 11:02 AM