Couple tries to trade kids for a bird 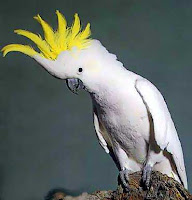 A couple in Louisiana was caught trying to trade two kids (who were not theirs) for a cockatoo and $175.

Donna Greenwell, who babysits the 5-year-old boy and 4-year-old girl, is also charged in the deal, which was negotiated via telephone.

Paul J. Romero, 46, and Brandy Lynn Romero, 27, had been trying unsuccessfully for years to start a family.

Police say Greenwell offered the kids up for $2000, but when the Romeros couldn't meet the price, a deal was sealed with the pet cockatoo (and $175 for legal fees.)

The kids are now in state custody. Their father has expressed interest in getting custody. The mom is reportedly in Texas.

Why did the mother have these random people watching these kids and why did the father not know about it? Poor kids. I hope they get to live with someone that values them more than a bird.

I saw this headline in the news yesterday but never read the article. I feel bad for the poor children and hope that things turn out okay for them. The mom? I hope she never gets them back. :(