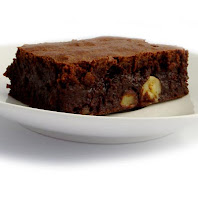 A high school student was arrested and charged with theft after stealing two brownies (value $1.00) from the school cafeteria.

Jan Richey said her son, Trey, 15, was charged with fifth-degree theft Jan. 8 after administrators at Mason City High School contacted police with the theft allegations, the Mason City Globe-Gazette reported Wednesday.
"I was very surprised," Richey said of the charges against her son. "I think they're being a little extreme. A brownie costs about a dollar. I could see a few days or a week of detention, but charging him like this ... it doesn't seem right."

The school says that they had him arrested to deter future thefts and to teach the child a lesson. Seems like a waste of taxpayer dollars to me. I can't imagine that a judge is going to give a punishment that's much different than what the school would have given.
Posted by Sara at 3:26 PM

This story made http://detentionslip.org ! Check it out for all the crazy headlines from our schools.