Authorities save lizards from the dinner table 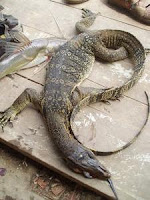 Authorities in Malaysia rescued 2,300 endangered lizards that were being kept in cages to be made into dinner.

The clouded monitor lizards were found in cages at a storage facility holding live and dead animals that were destined for cooking pots in Malaysia and abroad, said an official with the state wildlife department.

The lizards, which are about 5 feet long, will be released into the wild soon, the official said on condition of anonymity because he was not authorized to make public statements.

Again. I think I'll stick to Chicken and Beef.