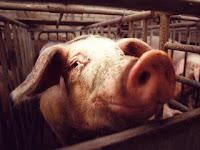 A pig on the way to the slaughterhouse was saved when it's truck crashed and it flew into a swimming pool.

The pig, a survivor of a June 22 crash involving a truck carrying 90 sows to a processing plant, was discovered Monday by LeAnn Baldy, who lives in an unincorporated neighborhood near the interchange of Interstates 40 and 430, the Arkansas Democrat-Gazette reported Wednesday.

"It's crazy, it's really crazy," Baldy said. "I'm just shocked. It's cool. Not many people look out their back window and see a pig in their pool."

The pig's death sentence was commuted by Jim Stonehocker, executive vice president for Odom's Tennessee Pride, which had planned to use the truckload of hogs to make sausage products.

"We could not put that into the meat stream," he said. "For a week it has been in the wild. What has happened to it? What has it been in contact with? You need to know what your hog has been eating."

"We believe this hog has earned the right to go and do something else," Stonehocker said. "We're in that process. We don't have it totally resolved."

Maybe he can go live in a petting zoo. That crash saved his life.