Assualt with a deadly cheeto 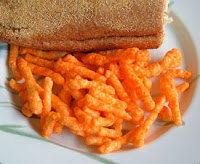 A Tennessee couple were involved in a domestic altercation with Cheetos.

Warrants filed by Cpl. Kevin Roddy, of the Bedford County Sheriff's Department, stated he responded to a call at a home on Pass Road, where 40-year-old James Earl Taylor and Mary S. Childers, 44, were allegedly involved in an argument.

According to Roddy's report, the pair became "involved in a verbal altercation" with each other "at which time Cheetos potato chips were used in the assault."

"There was evidence of the assault," the report read, "however no physical marks on either party and the primary aggressor was unable to be determined."

I wonder if they had orange marks on them. Are Cheetos made of potatoes, the article calls them potato chips?