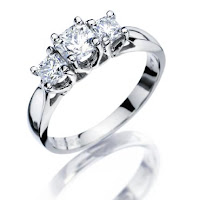 A New Zeland man is having a hunt for the engagement ring that was returned to him by his ex.

Anyone keen to pick up the ring, valued at NZ$5,000 ($3,268), will need to be in New Zealand's capital city, Wellington, on Saturday to join the hunt, the Dominion Post newspaper reported.

"I met this girl I thought was pretty cool, bought a ring, turns out she wasn't as keen," Anthony Gardiner, a 29-year-old call-center worker, told the Dominion Post.

Clues to the ring's whereabouts will start being posted on social networking site Twitter (http:/twitter.com/donoogle_com) at 8 a.m. local time on Saturday (2000 GMT on Friday).

Gardiner says he will keep posting clues, and if the ring is not found by the end of the day, "my clues will suddenly change into directions."

Having bought the ring in Hong Kong, he couldn't return it, and didn't want to sell it, so he hit upon the treasure hunt.

See, I would have just sold it. That's a really high dollar item to give away. I hope the lucky winner enjoys their ring though, I know I would.