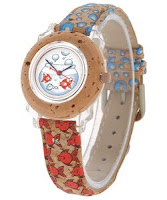 A fisherman in Hawaii was surprised when the fish he caught coughed up a gold watch.

Carish says he was enjoying a picnic Wednesday on Port Allen beach when he saw the nenue fish awkwardly swimming close to shore.

He says a friend gave him a bamboo stick and told him to get the fish. So he jumped into the waist-high water and hit the nenue until it went limp.

He noticed the fish had an abnormally large belly as he tossed it into a cooler.

A friend opened the cooler later to discover a gold watch next to the fish's mouth.

Carish says the watch was ticking and keeping correct time.

The fish took away the excuse he wanted to give to his wife for coming home late.