Have you seen a runaway tortise? 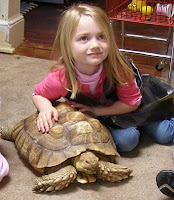 A Pennsylvania woman is missing her fifty two pound tortoise. It ran away.

“I am devastated that this turtle is gone, and I feel responsible and I feel heartbroken,” the Chester Springs woman said.


“It’s just terrible, and I want to make sure she’s safe. People out here eat snapping turtles, so I’m concerned someone will find her and make dinner.”

Last today, the 52-pound, two-foot African sulcata tortoise — one of the world’s largest types — pushed open a gate left partly unsecured after some duck chow was delivered. She is still missing.

Dougherty, 48, who runs Chester Springs School & Little Farm a day care for children in her house, also cares for a lot of pets and rescue animals — a lamb, a miniature horse, dogs, goats, unwanted Easter chicks and ducks — on her acre of propertyNala was an unwanted pet, too — brought about 2 1/2 years ago by a landlord who took her from a troubled tenant trying to terminate the terrapin, hoping to make soup.

Less than a half-hour passed before Dougherty realized the tortoise was gone. But by then, Nala had hightailed it for parts unknown — probably toward the Kimberton-Phoenixville area, Dougherty said.She’s really fast this time of year,” she added.

When Nala escaped two years ago, a deck contractor had put her outside the fence, thinking she was a wild snapping turtle who got trapped.“She got three miles away within 24 hours,” Dougherty said. “She went to my neighbor’s house and tried to get in their door.”