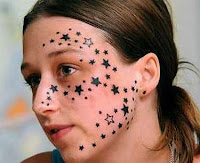 A Belgian girl is suing her tattoo artist. She claims that she asked for three stars on her face and then she fell asleep during the procedure (because getting a tattoo is so relaxing) and woke up with fifty six stars.

Kimberley Vlaeminck, 18, said she fell asleep during the procedure.

"I woke up when he was starting to tattoo my nose... I counted 56 stars, it is frightening," she said.

Tattoo artist Rouslan Toumaniantz, who is Romanian, said his client did not fall asleep and she got exactly what she had ordered.

He rejects Ms Vlaeminck's claim he had misunderstood what she had asked for.

"She was awake and looked in the mirror several times as the procedure was being done," said Mr Toumaniantz, who works at Tattoo Box in Kortrijk.

He says his client only regretted the tattoos later.

"She agreed, but when her father saw it, the trouble started," Belgian newspaper Het Laatste Nieuws quoted Mr Toumaniantz as saying.

So, what do you think? I think she's just having buyers remorse. How do you not notice that you're getting that many tattoos?