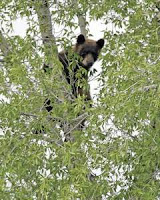 A Colorado family was shocked when a bear used their doggie door to enter their home and eat their dogs food.

"Our dog made a strange noise — a combination between a growl and a bark," said Brenda Freeman.

When her husband went to see what was wrong and opened the mud room door, “There was a bear two feet away from him,” she said.

The startled couple shut and locked the mud room door and went into their kitchen where they could look through the window into the mud room window. It was about 10:30 p.m.

The bear explored the mud room for 10 minutes, Freeman said. He did little damage but left paw prints on the window, ate all the dog food that was out and pulled a few herbs growing in pots out of the soil, she said.

“He was very graceful, very calm,” she said. “The bear didn't seem to care about the dog barking.”

She said the couple has lived in their home about five miles from Granby off U.S. Highway 34 for seven years and never had any bear issues. However, about four years ago a mountain lion came close to the house, she said.

That incident eventually prompted the Freemans to add a dog to the family. Aniden is a Turkish Kangal, a breed used to protect sheep from wolves. The 2-year-old dog — whose name is Turkish for “pounce” — weighs about 120 pounds, Brenda said.

She said her husband told her the bear looked like the same one authorities treed for a short time in Granby's Kaibab Park on Thursday, June 11.

"We thought it was quite a coincidence," she said.

The two incidents in fact may be weather-related, at least indirectly.

“It has to do with kind of the timing of Mother Nature,” said Randy Hampton, Colorado Division of Wildlife spokesman.

This time of year, bears generally eat grubs and forbs and by now are gorging on berries. The problem, he said, is that the same rain making the high country look like a Pebble Beach fairway is also prolonging the flowering phase of berry bushes.

So, the berries are not yet available and the bears may be seeking alternative food sources, he said.

Brenda Freeman said the bear left their mud room through the dog door and “played in our fire pit.” She also said a neighbor told her the bear got into their trash.

“We're kind of in their territory; we're in their space,” Freeman said.

She said the family is now securing their trash in the garage and they have moved the dog food from the mud room into the house.

“That should solve their problem,” Hampton said.

That's terrifying. I'm glad everyone was ok and no damage was done. Hopefully they can keep the bear out of their house.
Posted by Sara at 10:35 PM