Mom released from Thai jail after stealing a bar mat 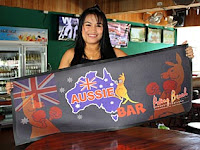 An Australian woman has been released from jail and a possible five year sentence after allegedly stealing a bar mat like the one on the left.

Ms Smoel, who had faced a possible five years in jail for allegedly stealing a bar mat, has been given a six-month suspended jail term and a 1000 baht ($38) fine for theft.

Officials at the Phuket Provincial Court said Ms Smoel was initially sentenced to six months' jail but the sentenced was suspended after she pleaded guilty in court.

They said Ms Smoel's passport and other documents, initially held with the Thai Police and immigration, were to be returned to her.

It said if the mother of four does not commit any crime in Thailand for the year, her jail term will not have to be served.

Before the court case, which was called at no notice, Ms Smoel had told journalists she was feeling the strain.

Ms Smoel's lawyer in Australia, Bernard Murphy, said he was encouraged by the developments, but remained cautious.

"There have been some very good developments today but I'm reluctant to say anything until Annice is on a plane and on her way home," Mr Murphy said.

"The most important thing for us to do is to get her home."

Ms Smoel was arrested on May 2 for allegedly stealing the bar mat from the Aussie Bar in Phuket where she was celebrating her mother's 60th birthday.

She spent four days in a cramped jail cell with three other women and had been told she could have had to wait 14 weeks before her case came to court.

Ms Smoel claimed her friends had put the bar mat in her handbag as a practical joke.

This is why it's not a good idea to get really drunk in a foreign country. Epically one with harsh sentencing laws. She obviously never saw that movie with Claire Daines.
Posted by Sara at 7:32 PM