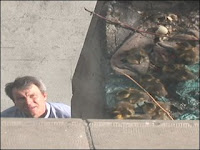 A banker in Washington saved a flock (is it a flock of ducks, I know it's a gaggle of geese) of ducklings when they jumped from a second floor balcony to follow their mother to water.

When the ducks hatched and the mother needed to get her ducklings to fresh water, a big problem became obvious.

The dozen day-old ducks couldn't follow. They were stuck on the ledge about 15 to 20 feet up, nervously pacing back and forth.

Enter Joel Armstrong who works at the bank. He was down on the sidewalk to help when suddenly, the first two ducks dropped like stones -- right into Armstrong's hands.

He kept up the chatter with mom, who was waiting at his ankles as a crowd started to build.

One at a time, with a steady hand and keen eye, this mild-mannered loan officer talked an entire family of baby ducks off a ledge.

"I think Joel's legacy is playing out right here - the duck man," said a bystander. "He's the duck man for life."

At least Armstrong has some experience. Several ducklings were stuck up on that ledge last May as well. He rescued all but one.

But this year had an added challenge. A city-wide parade was scheduled to pass by in just a few hours. Crowds started to build, but once he got the last three down by ladder, the drama wasn't over.

Together, the banker and the mother duck led the babies to water, straight down the middle of a downtown parade route.

Get out of the way please!

He directed the ducks through the streets, around crowd barriers, and finally home to the river.

It's just like the story (ok, not like the story at all). What a sweet story. He should get a book deal for that, it would make a perfect childrens book, they could call it make way for ducklings the sequel.