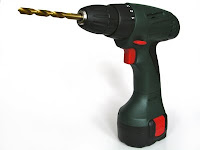 An Australian Dr saved a boys life by using a household drill to drill a hole in a boys head.

Nicholas Rossi fell off his bike on Friday in the small Victoria state city of Maryborough, hitting his head on the pavement, his family told The Australian newspaper in a story published Wednesday. By the time Rossi got to the hospital, he was slipping in and out of consciousness.

The doctor on duty, Rob Carson, quickly recognized the 13-year-old was experiencing potentially fatal bleeding on the brain and knew he had only minutes to drill a hole through the boy's skull to relieve the pressure.

But the small hospital was not equipped with neurological drills — so Carson grabbed a household drill from the maintenance room.

"Dr. Carson came over to us and said, 'I am going to have to drill into (Nicholas) to relieve the pressure on the brain — we've got one shot at this and one shot only,'" the boy's father, Michael Rossi, told The Australian.

Carson called a Melbourne neurosurgeon for help, and the specialist talked Carson through the procedure — which he had never before attempted — by telling him where to aim the drill and how deep to go. Soon, a blood clot fell out, relieving the pressure on the boy's brain.