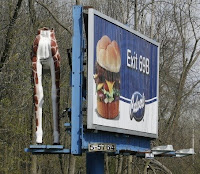 Vandals have stolen a ten foot giraffe neck and head off of a billboard in Michigan.

Vandals apparently whacked the head and neck off the fake animal, which has stood for more than a decade on a platform behind a billboard overlooking westbound I-196.

The giraffe had become a sort of accidental landmark, serving no real purpose other than a sort of kitchy roadside curiosity unrelated to the billboard's advertising. That head loss definitely was not because of an advertisement change, and Grand Rapids Outdoor Advertising would like to have it back.

The giraffe's body remains standing. But there has been no sign of what may be a 10-foot-long portion of the hollow animal, even though such a thing would seem a feat to hide, authorities said.

The giraffe had been installed by the billboard's previous owner for a customer. There was no reason to take it down once the advertising changed, so the giraffe remained, said Randy Disselkoen, president of Grand Rapids Outdoor advertising.

He thinks those involved in the incident, which happened months ago, were kids pulling a potentially perilous prank.

Disselkoen was reluctant to discuss the incident for fear publicity about the theft might encourage further dangerous vandalism.

"Someone could get killed doing that if they're drinking or up there in the dark," he said. "We just don't want people up on our billboards because it's dangerous. They could fall or be electrocuted."