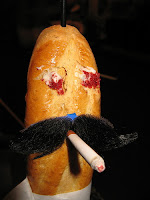 An American French bread expert says that the French are no longer making their baguettes crusty enough.

Steven Kaplan of New York's Cornell University says after spending a lifetime studying and eating French bread he has witnessed the slow death of the crust, The Times of London reported Friday.

"This is a significant and catastrophic trend," Kaplan told The Times. "The crust is what stands between France and the Armageddon of soft, mushy, repugnant loaves that we get in the U.S. and you get in Britain, too."

Kaplan says bakers in France have been cutting down on cooking time, succumbing to the global trend for softer food.

The upshot, he says, is the loss of the Maillard reaction, a chemical process occurring at high temperatures and leading to browning and crispiness.

French bakers say they are responding to a growing number of customers who demand baguettes that are "not too cooked."