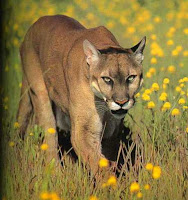 A California dog nearly lost its life after protecting its family from a mountain lion.

The dog was severely mauled in the stomach area and rushed to a veterinary hospital for surgery, said Orange County sheriff's spokesman Jim Amormino. The 5-year-old black labrador mix named Hoagie underwent a four-hour operation and was expected to survive, he said.

William Morse told KABC-TV that he was hiking with his wife near a campground in the Cleveland National Forest, about 10 miles from Lake Elsinore, when a 120-pound mountain lion approached.

"Out of nowhere, a mountain lion just charged us, attacked us. And my dog saved our lives," Morse said.

He said the attack lasted less than 10 seconds and left the dog with deep wounds.

But, Amormino said, the dog put up a "vicious fight. I'm sure that lion was hurt, too."

Morse said he was traumatized by the attack and will never return to the campground where he and his wife have been hiking for years.

That's just terrifying. Thank goodness for the dog. Mountain lions are scary. Hopefully the dog doesn't have to many lasting images.