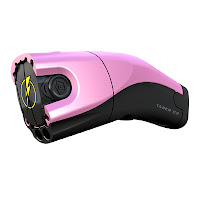 A woman in Georgia helped a police officer subdue a criminal using the taser that she kept in her diaper bag.

Tanisha Cross, 20, of Atlanta, said she was driving with her mother to a Wal-Mart in Lithonia when they spotted the police officer struggling with an attacker who had rubbed pepper spray in the officer's eyes, WBS-TV, Atlanta, reported Monday.

Cross said she retrieved the Taser stun gun her husband had given her for Christmas from her child's diaper bag.

"I went straight for my kid's diaper bag and I got it and asked it if he (officer) wanted me to do it and he said, 'Yeah,'" Cross said.

Cross said she used the stun gun on the suspect's arms and legs, giving the police officer the chance to subdue the attacker with a help of a security guard.

"He's brave," she said of the police officer. "He did his best to keep him from his gun. He handled the situation very well. I was just glad I could help him."

She keeps a taser in her diaper bag?