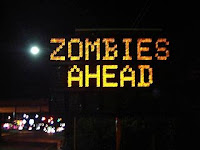 Hackers in Austin, Tx changed a traffic sign to say "Zombies Ahead" and "Run Zombies Run!"

As he drove south on Lamar, traffic controller Bruce Jones saw the first sign flash the Nazi zombies message at 6 a.m. and wheeled his truck around for another look. Then he said he noticed that the second sign, directed at northbound drivers, had also been tampered with.

Jones, who has one of only two keys to the locked access panels on the portable signs, said that the hacker broke into the panels on each sign and bypassed the passwords before leaving five different zombie messages and even changing one of the passwords. Jones said he had to wait until 8 a.m. to call the manufacturing company to figure out how to override the hacker’s work. He speculated that the hacker could be a computer genius from UT.

The biggest safety hazard came from drivers slowing down or stopping their car to take pictures, Jones said.

The hacking occurred within weeks of various articles appearing online with descriptions of how to hack into these road signs — which point out that such an act is illegal.

Dennis Crabill, project manager with the Public Works Department, said the access panels are always locked and are not programmed with the default passwords these sites suggest. Short of having a watchman on duty around the clock, he said there is little more the city can do to prevent such vandalism.

See, I don't think that's a childish prank. I think it's an awesome prank. I hope there are copycats where I live. The signs that say "Caution, winter driving conditions exist" are not really helpful when there is obviously six inches of snow on the road. It would be better if they prepared us for the Zombie Apocalypse.

LMAO that is great!