Not impressed by zookeepers in Japan 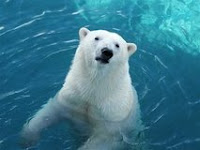 Zookeepers in Japan could not figure out why their pair of polar bears would not mate. They were highly puzzled when the male polar bear never got the hots for the female polar bear. They had him attend classes on how to hook up with girl polar bears. They told him that he should try taking out to dinner. He refused. They've been trying since June to get the polar bears to do the deed so the zoo could have little polar bears.

So they decided to do a test on the polar bear to see what was wrong. After putting the bear under they did a "gender test" and found out that the bear was really a girl.

Really, how hard is it to tell a boy bear from a girl bear? Now I'm not a zoologist, but I imagine that if I was one I'd be able to tell the sex of the animals that I was working with. If the bear has a penis it's a boy and if it has a vagina it's a girl. Pretty simple.
Posted by Sara at 11:13 PM