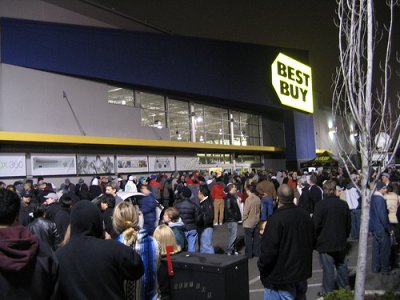 I've always been a fan of sales thus making me a fan of Black Friday. I've braved electronics stores, toy stores, discount stores and the mall for Black Friday for years. I wait in early lines when the sales are good enough.

As my husband was looking through the adds he said that Wal-Mart had some good stuff. I told him that there was no way we were going to Wal-Mart for doorbusters because people get killed at Wal-Mart every year. The husband said that I was exaggerating. As proved by the news yesterday. I was not exagerating. The management at WalMart does nothing to prevent the mob scene that comes from having huge sales, lots of people, low stock and people who want to cut in line. Which creates many problems every year. The management at Best Buy however, hands out tickets to the people that have been waiting in line (and some of those nutsos get there 24 hours in advance) which lessens the crazyness because everyone knows in advance and makes sure that the sale items go to the person that's waited the longest, not the person that's the fastest or the toughest. Because even if no one gets trampled things like this should not happen.

This wouldn't of happened if WalMart ensured that it didn't happen by following Best Buy's model and handed out tickets.

Yesterday I left at 8:30 and was home by noon. There were no crowds at all when I was out and I managed to get sweaters and stickers and games and a TV from the various stores I hit. Getting everything I wanted and then some.
Posted by Sara at 1:35 PM