Firefighters respond to fire at their own station 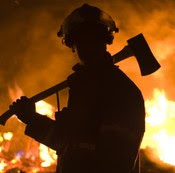 Several firefighters in Hawaii were surprised when they got a call to report to a fire: at their own station caused by food left cooking on the stove.

when they responded to reports of a traffic crash May 22. They received a second call on their way back from the crash to put out a fire at their own station, the Honolulu Advertiser reported Tuesday.

"The firefighters (at the station) are very chagrined about it," Seelig said. "It goes to show that no one is immune."

Seelig said unattended cooking is one of the top causes of fires locally.

"The fire's cause was attributed to unattended cooking," Seelig said. "We, like everybody else, need to be careful and attentive when cooking."

You'd think that firefighters would be more careful about fire safety wouldn't you?