Man robs store with beer box on his head 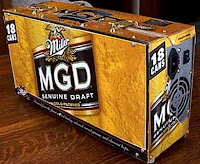 A Nebraska man used a beer box as a mask when he robbed a convenience store earlier this week.

Lincoln police Capt. Bob Kawamoto said the man entered the Kwik Shop store at about 4:30 a.m. Monday with the box on his head and a green rag wrapped around his hand to imply that he was holding a weapon, the Lincoln Journal-Star reported Tuesday.

Kawamoto said the robber left the store with nine packs of Newport cigarettes, worth nearly $50.

I guess he really wanted those smokes. Probably to go with the beer.