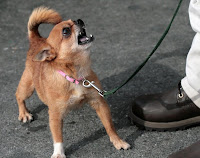 A Michigan woman's chihuahua blew away in high winds yesterday.

Dorothy Utley said around 2:30 p.m. when rain and whipping winds hit Metro Detroit, her eight-month-old dog was thrown into the air and "nobody could catch her."

"She just went. The wind came up and within seconds she was gone," said Utley, a frequent vendor, who sells clothes, tools and bedspreads at the market. "She was so beautiful, a gift from God."

Utley said Tinker Bell is a black and brown, long-haired Chihuahua. She was wearing a red collar, but didn't have tags. The forceful winds broke her leash, which was left behind.

A search for the pup has been on since yesterday. Utley and her husband along with about 30 others have scoured the market grounds and miles of nearby roadways for the dog. They've even put up posters and are offering a reward for her safe return.

I remember another Dorthy had that problem once. It lead her to a magical land with talking animals, munchkins, wizards and wicked witches.

I saw this story on WXYZ -TV in Detroit. The people were heartbroken that lost her. I sure hope she is found and is OK.